In Athens, the Last Man Painting

ATHENS — Leonardo DiCaprio’s face glowed triumphantly from a large billboard here atop the Athinaion, an old movie theater where “The Wolf of Wall Street” was recently playing. Mr. DiCaprio had just been nominated for an Oscar, and Vasilis Dimitriou had painted him larger than life, with a gleaming gold statuette against a sea of red and black brush strokes.

The look was vintage movie poster, bordering on 1940s noir, imbuing Mr. DiCaprio with a mysterious allure befitting Humphrey Bogart back in the day.

Mr. Dimitriou, 78, has never met a Hollywood star, but he has painted thousands of them. Nearly every week since the age of 15, he has immortalized legends of the screen in dreamlike friezes of love, anger, pride or temptation — often deftly, sometimes not, but always with flair.

Heroes are depicted as if from the pages of a comic book in a moody haze of luminescence and shadow, with an atmosphere that flits between reality and fantasy. The romanticized images evoke an earlier age of celluloid, movie magazines and cigarette-smoking starlets, incongruous in an age of DVDs and downloads, digital marquees and movies on demand.

Today, he is the last living movie billboard painter in Greece, and one of only a handful in Europe, his craft on the verge of extinction. When silent films took off in the 1920s, Hollywood studios employed graphic designers to convey the glamour and excitement of new releases, and handmade billboards came to adorn theaters around the world. The rise of the automobile helped spur a booming industry of painted highway billboards across America, Europe, Africa and in Asia.

But in an era of mass-produced printing, the practice has been all but snuffed out. Only a tiny number of people like Mr. Dimitriou keep up the tradition.

“Painting is always on my mind,” he said one recent evening in his brightly lit atelier, surrounded by a kaleidoscope of paint pots and billboard-size canvases. “When I finish a poster and put it in the theater, it’s a thrilling feeling, knowing that people will see it and feel some magic.”

His left hand is stiffened with Parkinson’s disease — the result, doctors suspect, of a brief stint as a boxer in his youth. He no longer climbs paint ladders easily, and his arm can tire after hours of holding a brush. But none of that deters the trim, feisty Mr. Dimitriou.

Athenians of all ages are familiar with his work, even if few have ever met him. “There was something stylized and nostalgic” about the painted billboards, said George Athanasopoulous, 50, who remembers being transfixed by them as a child. “Like for James Bond, he would do a portrait of Roger Moore surrounded by guns,” he recalled.

Today, “there is a sameness to everything,” Mr. Athanasopoulous added. “But what he does is very special.”

For a near-octogenarian, Mr. Dimitriou has a daunting schedule. Each affiche takes three to four days to complete, and he paints one to two a week for the Athinaion, which has employed him for more than 40 years and is the last theater in Athens to eschew studio-made photographic posters. Dressed in a wool cap and a black sweater, he bustled about his small work space, a low-slung stucco building with one wall made to the exact dimensions of the Athinaion’s billboards. A cropped image of Mr. DiCaprio’s head rested near paint pots, while Penélope Cruz, smoldering in a studio shot from the 2001 movie “Blow,” pouted from a wall. “My girlfriend,” Mr. Dimitriou said with a smile.

Nearby, a scrapbook bulged with photos of his renderings: “The Exorcist,” forebodingly painted in chiaroscuro, blood oozing down the Greek letters of the title; “Lolita,” with a lithe, prepubescent Dominique Swain stretched in a wet dress on the grass, her toe pointed in the air; “Ali,” with Will Smith’s boxer face tensed like a bull’s.

Mr. Dimitriou grew up poor in the Athens suburb of Kypseli. His father was often absent during World War II to fight in the Greek resistance as the German Army advanced. To bide time, the boy began drawing, and a passion seized him. Lacking money for pencils or even paper, he would scrounge chalk and sketch pictures on sidewalks.

Then the war crashed in on his reveries. After his eighth birthday, Nazis stormed their home and took his father away. Miraculously, his father survived execution, crawling from a mass grave and making his way back to the house, covered in blood. He went to stay with comrades and continued fighting. It was the last the boy would see of him for two years.

Mr. Dimitriou took refuge in his drawing, and after the war ended, it would become his ticket out. Penniless, he and his friends climbed trees at an outdoor cinema to catch the latest films. One night the manager chased them, and Mr. Dimitriou jumped into the theater, where the projector operator collared him and suggested he volunteer in exchange for watching films.

Soon, the manager noticed Mr. Dimitriou’s drawing talent and asked him to try painting movie posters. “I would interpret the scene my own way,” he recalled. His favorite stars got the best treatment. “If I saw Gary Cooper and Marlon Brando, I’d paint Brando,” who had a rawer allure, he said. Eventually, 10 theaters around Athens would commission his work.

For Mr. Dimitriou, it was a golden age of cinema. “Back then, you would go to the movies in a suit and tie,” he recalled. “Women would wear beautiful dresses. There was an intermission, and half the theater would go the foyer to have a drink and discuss the movie. Now that’s gone.”

So, too, is the industry that he and a small army of artists used to keep alive. But his local legend remains.

This month, Mr. Dimitriou tacked up a canvas in his atelier and sketched a montage for “Winter’s Tale,” featuring Jessica Brown Findlay in her cinematic debut after “Downton Abbey.” To make paints that won’t run in the rain, he boiled glue on a makeshift stove and added it to powdered pigments: chrome yellow, red, lapis blue, turquoise.

He worked silently and methodically, climbing a ladder and squatting on stools as he made his way across the canvas. When it was ready, he drove to the Athinaion with his son-in-law to hoist the poster on the marquee. A man approached. “I’m a huge fan,” he said, giving Mr. Dimitriou a hug.

Later, back in his atelier, Mr. Dimitriou sighed. Recognition was gratifying. Still, he said, “it doesn’t feel so good knowing that this is a dying art.”

He leafed through the pages of his scrapbook, and gazed at oil paintings he had done for himself, including a red-hued homage to Ms. Cruz.

“As long as I can keep painting, I’ll do it,” he said. “When I stop breathing is when I’ll stop painting.” 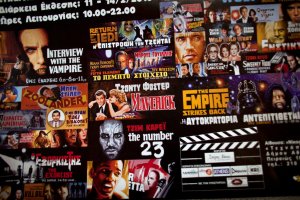